Her Excellency the Right Honourable Michaëlle Jean is the current Governor General of Canada. She was appointed by Elizabeth II, Queen of Canada on August 4, 2005. The Governor General of Canada is the vice-regal or viceroy representative in Canada of the Queen of Canada , who is the head of state. A viceroy is a royal official who governs a country in the name of and as representative of the monarch. Canada is one of sixteen British Commonwealth realms, all of which share the British monarch as their royal leader. The monarch appoints the Governor General on the advice of the Canadian Prime Minister, who is the Canadian Head of Government, after which the Governor General maintains direct contact with the British monarch. There is no specific term.

In a speech at the Opening Plenary of the World Youth Congress in the City of Québec, on Tuesday August 12, 2008, she stated:

"Yet it is too early to claim victory. Why? Because our planet is facing an environmental crisis. Sharp rises in the costs of food and energy are destabilizing entire regions of the world." 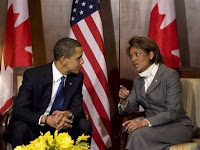 In addition to his discussions with Canadian Prime Minister Stephen Harper, President Obama also discussed issues of trade, energy, and the environment with Jean. Gov. Gen. Michaëlle Jean Obama greeted President Obama at the airport after Air Force One touched down in Ottowa, Canada. She escorted the American president past a Royal Canadian Mounted Police honour guard that lined the airport tarmac. The Februarly 19th visit was President Obama's first trip abroad as Commander-In-Chief.

Michaëlle Jean was born September 6, 1957 in Port-au-Prince , Haiti . Jean was a refugee from Haiti, coming to Canada in 1968. Jean married Canadian filmmaker Jean-Daiel Lafond and the couple adopted as their daughter Marie-Éden, an orphaned child from Haiti.
Michaelle Jean and Stephen Harper 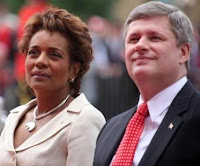