How About Putting Your Money In A Black-Owned Bank 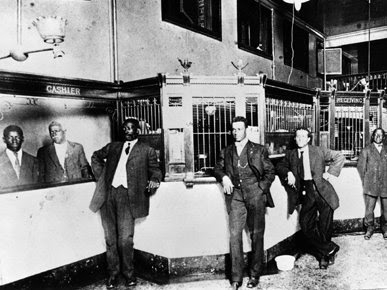 Some people get upset with 'black' anything. Or African American. Yet even though America elected Barack Obama to be our president, there is still a black community in every major city in the United States. Thus the need for institutions in these communities. Whites rarely go to black communities and many repress the reality of their existence. Yet why not then have black banks, and other black-owned institutions, in black communities?

Enter the National Bankers Association, which was founded in 1927 as the trade association for the nation's 103 minority and women-owned banks (MWOBs). Founded as the Negro Bankers Association, this name was changed to the National Bankers Association in 194. Their members include banks owned by African-Americans, Native-Americans, American-Indians, East-Indians, Hispanic-Americans, Asian-Americans and Women. MWOB's are located in 29 states and 2 territories spanning 60 cities and the District of Columbia. Their employees number over 15,000.
MEMBER BANKS
In the aggregate, MWOBs have assets in excess of 31 billion dollars and service over 3 million depositors. Collectively the individuals who serve on the boards of directors of their member banks represent some of the most influential leaders in minority communities and urban centers across the country. Since 1980 the NBA has formed a successful partnership with Treasury representatives of Fortune 500 corporations. MWOBs, with few exceptions, serve distressed communities plagued by many social and economic problems. Their institutions are deeply committed to providing employment opportunities, entrepreneurial capital and economic revitalization in neighborhoods which often have little or no access to alternative financial services.

Photo: The Penny Savings Bank of Birmingham, Alabama, founded by William R. Pettiford, was the first black-owned banking institution in Alabama. It operated from 1890 to 1915.
Posted by Norris McDonald at 9:31 PM