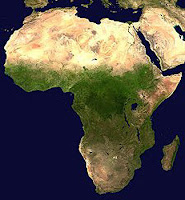 Delegates of 50 African countries to the Barcelona, Spain climate talks staged a 24-hour boycott of the meeting and demanded that the developed countries should cut greenhouse gas emissions by at least 40% below 1990 levels by 2020. The Barcelona meeting preceeds the climate change meeting in Copenhagen, Denmark in December to craft a follow-up to the Kyoto Protocol. The Copenhagen deal would succeed the 1997 Kyoto Protocol, which called on 37 industrial countries to reduce heat-raising gas emissions by an average 5 percent below 1990 levels by 2012. It made no demands on developing countries like India and China.

U.N. Secretary-General Ban Ki-moon is deeply frustrated by these developments to crafting a Kyoto II. Scientists say industrial countries should reduce emissions by 25 to 40 percent from 1990 levels by 2020.

African countries, China and India are right to hold our feet to the fire. If any country is culpable in causing global warming, it is the USA. So we need to show leadership in addressing climate change mitigation. We believe a global climate change treaty could be a multi-trillion dollar market stimulator that could revolutionize how energy is produced and used. Yet the U.S. reluctance to pass climate change legislation is getting in the way of this global market renaissance. America must pass cap and trade climate change legislation and must help in constructing an international treaty that will lead to global warming mitigation. (Economic Times, 11/5/09, Yahoo News, 11/3/09)
Posted by Norris McDonald at 7:22 PM