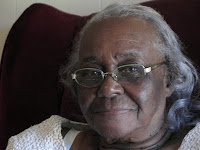 Ruby Hollmes, left, lives across the street from the 1,000-acre Arrowhead Landfill near Uniontown in southern Perry County. The landfill is just off U.S. Highway 80 in Alabama and on many days, 85 to 110 rail cars bring in coal ash from Kingston, Tennessee each carrying 105 tons of moist ash sealed in thick plastic material that Tennessee Valley Authority officials call "burrito wraps." The ash is from the huge spill in Kingston, Tennessee in December 2008.

Uniontown, with fewer than 2,000 residents, is a majority-black town in a majority-black county that is one of Alabama's poorest with nearly half of Uniontown's families listed as living below the federal poverty level. In Perry County as a whole, 2008 census figures show a population of fewer than 11,000, with 33 percent below the poverty level. Ninety-five percent of the county's nearly 1,900 public-school students receive free lunches. The September unemployment rate, nearly 20 percent, was among the state's highest.

So far, based on a $1.05-a-ton fee on material shipped into the landfill, the Perry County Commission has received more than $500,000. Most of the money comes from shipments of the coal ash spilled when an earthen dam collapsed last December at the TVA's Kingston Fossil Fuel Plant in Roane County, Tennessee. Based on what it anticipates receiving during the current fiscal year, the commission has pledged $400,000 each to its two municipalities, Marion and Uniontown, and $550,000 to the county school board. This fiscal year alone, the county should take in $3.5 million from the landfill, mostly because of the ash shipments. That sum nearly equals the county's budget, minus what it gets from the ash fees.

Phill-Con Services, a Knoxville civil construction and operation services company, runs Arrowhead for a group of Atlanta-area investors. Under its permit from the Alabama Department of Environmental Management, the landfill operates as a solid-waste disposal facility.

Before the first coal ash shipment arrived July 3, Arrowhead was taking in between 100 and 1,500 tons of municipal, commercial and other nonhazardous waste a day. Since the coal ash began coming in, the daily dump ranges from 8,000 to 11,000 tons. Depending on the volume shipped, the landfill should be receiving coal ash from TVA for the next 12 to 18 months. According to an EPA fact sheet, the facility is taking about 3 million of the 5.4 million cubic yards of ash spilled at the Kingston site.

Some landfill proponents want to get the rest of the spilled ash, for which officials are trying to work out a disposal plan. They would like to get what the Kingston plant is producing now until the landfill runs out of space, as well as coal ash produced elsewhere in the state because no disposal site has the environmental safeguards that Arrowhead does.