Why Is The House Environment Hostile To The CBC? 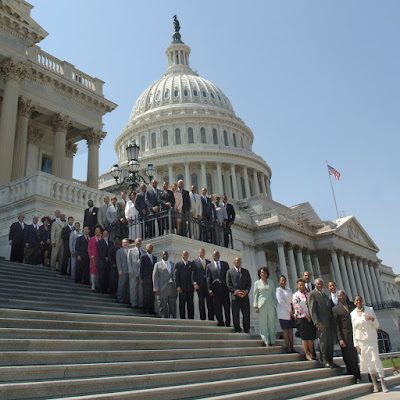 One would think that the U.S. House of Representatives would be more hospitable to its African American members since it is now controlled by Democrats. Not even when the Republican Party was in the majority has the Congressional Black Caucus (CBC) been under such assault as it is now. The CBC should be outraged. Is this some bizarre attempt to control them because of their power? Doesn't the Ethics Committee know what they are doing? Don't they notice that all of their inquiries are directed at the black members of Congress?

Representative G.K. Butterfield (D-N.C.), the only African-American lawmaker among the Ethics Commitees 10 members and Congressional Black Caucus Chairwoman Barbara Lee (D-Calif.), must get to the bottom of this. While a substantial number of white lawmakers have been referred for violation, the ethics committee has not yet launched formal investigative subcommittees with respect to any of them — as it has with the seven African-American members.

No wonder there is not black ownership of energy insfrastructure, properties or products in America. The Congress has the CBC intimidated and 'under control.' Heaven forbid the CBC tries to get even some of the trillions of dollars being thrown at Wall Street to create some black energy company owners. So the environmental movement isn't the only sector that ignores blacks and expects them to go along with whatever they say.

Black lawmakers are “easy targets” for ethics watchdog groups because they have less money — both personally and in their campaign accounts — to defend themselves than do their white colleagues. Campaign funds can be used to pay members’ legal bills. Yet two-hundred-and-thirty-seven members of Congress are millionaires. That’s 44 percent of the body – compared to about 1 percent of Americans overall.

The nation’s only black senator, Roland Burris of Illinois, is currently under investigation by the Senate Ethics Committee. (Politico, 11/4/09, Politico, 11/6/09)
Posted by Norris McDonald at 5:20 PM