Dick Gregory saved my life in 1991. When asthma was trying to kill me, Dick arranged for me to get credit at a health food store and would even give me rides home when I did not have a car. Dick would put his wife Lil on the phone with me to assure me sometimes when I had doubts about the things he was recommending. Of course, Dick was always right. I consider Dick to be my mentor.
Norris McDonald, former Greenpeace
President Peter Bahouth & Dick Gregory 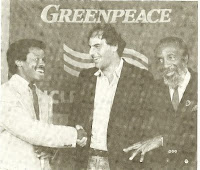 One night Dick had me across the street from the Howard University Hotel in the parking lot with one of his scientists using my car to demonstrate a synthetic fuel. He had his astrologer with him reading the stars and Dick just always 'tripped me out.' Clearly he was Ziggy Stardust and the Spiders From Mars way before David Bowie had a clue. Dick was right there helping to get the NO FEAR ACT passed--the first civil rights law of the 21st Century.

Dick could have gained megastardom if he so desired. But Dick chose activism and the human touch. I would walk the street with Dick and he would always put a few dollars in a street person's cup. Dick related to the average guy on the street. We were once in a Rolls Royce when he was driving me home and somebody pulled up to us at a stop light. The guy said, "You look like Dick Gregory." Dick said, "I am Dick Gregory." And everybody laughed. Dick is supercool and never has any bodyguards or entourage with him. Although I know I can never match Dick's performance, it sure does give me something to shoot for.

Dick there are many that follow you. But you were the first. The first environmentalist. The Godfather of Environmental Justice. Pre Marvin Gaye's "What's Going On" and I bet you even influenced Marvin. Thank you Dick Gregory for your guidance. May I achieve even a fraction of what you did in your incredible life.
Posted by Norris McDonald at 6:23 PM