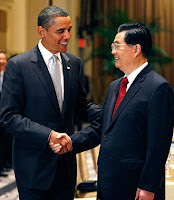 The Chinese people love Black people from America. We base this assessment on the experience of our parent group [Center for Environment, Commerce & Energy] staff while traveling thoughout China in 2007.

The Washington Post published an article today, "China Confronts Issues Of Race And Long-Held Prejudice," that was so biased against good Chinese/African American relations that we have to respond. The article takes some small negative experiences of one person and exaggerates them into a conclusion that Chinese are racist agasint Blacks. Nothing could be further from the truth in our experiences. Again, Center staff found nothing but love from agricultural areas to urban areas from Chinese people.

TOPIX COMMENTS
Trying to paint President Obama's trip to China with a racist brush is just beyond the pale. One has to bend over backwards to come to such a conclusion. Fortunately, the love that will be displayed from the Chinese people to President Obama will dispel any notions that Chinese people are prejudiced against Black Americans.