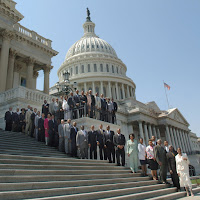 The Congressional Black Caucus (CBC) is using its power to force the House Financial Services Committee to consider including more African American participation in Treasury and Federal Deposit Insurance Corporation programs, such as the Troubled Asset Relief Program. Now if only the CBC would exert this same authority on the pending climate/energy bill, Blacks might actually gain access to energy infrastructure, products and services (besides caulking guns).

The CBC complained to commitee Chairman Barney Frank (D-Mass) that not only were their constituencies not getting sufficient participation in bailout programs, but that the administration was not doing enough to create jobs for low-income people or preserve minority-owned institutions such as radio stations, lending companies and jobs programs. There are 10 members of the Congressional Black Caucus on Chairman Frank's committee and they have the votes to hold up any legisation under its jurisdiction. They are using that power now to hold up revamping new rules for financial markets until their demands are met.

So far, CBC and Frank meetings with Treasury Secretary Timothy Geithner and White House Chief of Staff Rahm Emmanuel have been unsuccessful. The CBC appears to be committed to getting concessions or is ready to kill the administration's initiative to overhaul financial-market rules. Now if the CBC would dig in on energy and climate legislation, African Americans might get a foothold into the energy markets (oil, gas, coal, nuclear, wind, solar, efficiency and conservation). (WSJ, 11/20/09)
Posted by Norris McDonald at 6:17 PM