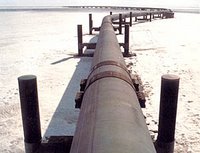 The oil pipeline that delivers oil from Prudhoe Bay on Alaska's North Slope to Valdez, Alaska in Southern Alaska has been closed for repairs due to corrosion inside the pipes. The loss of the 400,000 barrels per day represents about 2.6 percent of total U.S. oil use (USEIA) and will probably raise gasoline prices at the pump. The Trans-Alaska Pipeline, which is owned by BP and operated by The Alyeska Pipeline Service Company, runs 800 miles from the top the state to the bottom shore.

It is being reported that corrosion was found in only 16 miles of the pipeline, but could it be possible that the entire line has a problem? Let's hope not. Not as much as Americans love and need to drive. Americans also demand low prices gasoline. It is an election year and voters blame incumbent politicians for high gasoline prices. Politicians know this and they will pass goofy legislation to mollify voters to scare oil companies into lowering prices in the short term. The bottom line is that America has to invest in new sources of oil to keep prices low and the public should start purchasing and demanding alternative tech vehicles so that we are not captive to only oil powered vehicles. (Washington Post article)
Posted by Norris McDonald at 5:19 PM