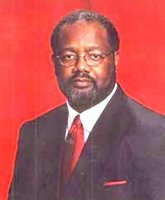 The very first article on our Blog in March 2005 was about the National Wildlife Federation electing a black person as its chairman, a revolutionary event in the highly segregated environmental community. Unfortunately, it appears that the new chairman carries little influence with the president of the organization. A simple request from the chairman to the organization president to complete a 10-question diversity survey is being ignored. Just because there is a person that looks like you at the top, if you are a minority, doesn't necessarily mean it will help more of those same types of people. In fact, sometimes things get worse. Former EPA Administrator Carol Browner sure wasn't helpful to Marsha Coleman Adebayo.

AAEA made a request to the National Wildlife Federation to fill out our Diversity Survey several years ago and again several months ago. Not surprisingly our request was ignored several years ago by former NWF president Mark Van Putten and is being ignored by current president Larry Schweiger. The difference this time though is that we also made the request to Jerome Ringo, above left, NWF's black chairman elected in 2005. Mr. Ringo asked Larry to take care of it and he was ignored. We have yet to receive a reply to our 10 simple questions about diversity at NWF. Are they utilizing the unwritten 'one black (professional) rule?' We do not know, and our audience does not know, because they will not answer our survey.

Twenty of twenty five environmental groups have refused to complete the Diversity Survey for our Diversity Report. We know the tricky hoops Jerome had to jump through to get the chairmanship. However, Ringo perservered and his persistence paid off. Don't sweat it Jerome. Mike Espy didn't change a certain culture at the Department of Agriculture either. Just ask the small black farmers around the country. And these interesting events at EPA and Agriculture occurred under the first so called 'black president.' Epilogue: NWF will not complete the survey and AAEA will probably be vilified for asking (more likely ignored).

NAT'IONAL BLACK CHAMBER OF COMMERCE SHOWS PATTERN
Is Merrill Lynch a Racist Institution: Here is a Fortune 100 company that has a Black CEO, Stan O’Neal. It also gives handsomely to Rev. Jesse Jackson’s Wall St. Project in the name of diversity. However, with little investigation you find a long history of racial upheaval within the walls of this company. Recently, the company settled a lawsuit by Black players of the National Basketball Association. They appeared to have a “Black rate” for investors from the NBA that was significantly higher than their normal market rate. Currently, there is a class action lawsuit filed and supported by over 100 current or past Black brokers against this curious corporation.
Posted by Norris McDonald at 7:24 AM