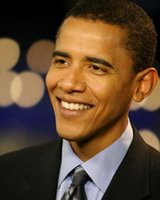 Senator Barack Obama took time to plant an olive tree in Uhuru Park in Nairobi with Kenyan environmentalist Wangari Maathai, winner of the 2004 Nobel Peace Prize. The press if really promoting Obama's opposition to corruption and ethnic divisions. Surely there is more going on there than just those negative items. At least they covered the tree planting. There is plenty of corruption and ethnic divisions right here in America for the press to cover with Obama.
Posted by Norris McDonald at 6:06 PM