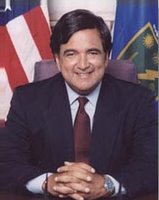 Two term governor of New Mexico, former Department of Energy Secretary, former congressman, former U.S. Ambassador to the United Nations Bill Richardson is running for the presidency. He is not enthusiastic about nuclear power, but accepts its usefulness in the energy mix. This makes him lukewarm on global warming. He wants to rely mostly on wind and solar that only operate 30% of the time and cannot dependably provide the electricity we need 24-7-365.

Q. What is the future for nuclear power? (Florida Sun-Sentinel.com)

A. The future in nuclear power is one that has to be on the table. The nuclear option has to be on the table -- not, however, at the expense of investments in renewable energy and technologies, which I believe hold more promise. But because nuclear power emits hardly any greenhouse emissions, and because its technology is improved, you have to look at it as an option. My worry is that there will be such a rebound in nuclear energy that we will not do the necessary investments in renewable technology and distributed generation and fuel cells.

And nuclear power still has to resolve problems in waste, cost, safety, although its safety is improved. And nuclear power still has a lot of problems with the public, which the [nuclear industry] needs to explain, which it has not done so adequately. Politically they've sheltered themselves with one party. So they need to build alliances with environmental leaders, with local officials; they sort of sit in a bunker. But it should be on the table.

ALL CANDIDATES
Posted by Norris McDonald at 6:34 PM