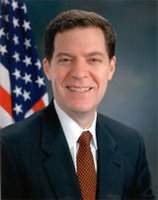 Kansas senior Senator Sam Brownback is a candidate for the Republican nomination for the presidency. He is super conservative and hopes to keep the GOP true to its principles at the Executive Branch level of our national government. He was a broadcaster, teacher, attorney and member of the House of Representatives before becoming a senator. He is married to the former Mary Stauffer, heiress to a Topeka newspaper fortune. They are the parents of five children (three daughters and two sons).

Senator Brownback supports nuclear power and is thus serious about reducing global warming. He voted for the Energy Policy Act of 2005 and opposed the Wyden Amendment against the Price Anderson nuclear insurance provisions.

According to Blackelectorate.com, one of the nation's most well respected news outlets, Senator Brownback is very good on race relations issues.

ALL CANDIDATES
Posted by Norris McDonald at 7:48 PM