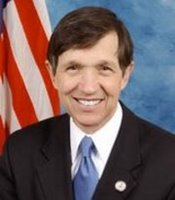 Dennis Kucinich, left, is running for president again. He is a darling of the left and the traditional environmental community. He is not good on global warming because he rejects nuclear power as a part of the solution.

According to BigEye.com, "Congressman Kucinich acts upon his belief that protection of the global environment is fundamental to preserving the life of all species. He has been honored by Public Citizen, the Sierra Club, Friends of the Earth and the League of Conservation Voters as a champion of clean air, clean water and an unspoiled earth. He was an early critic of nuclear power as being risky economically, and environmentally, raising questions about nuclear waste byproducts." Thus, we must conclude that Kucinich is not serious about global warming. There is no way global warming can be mitigated without nuclear power as a big part of the electricity generation solution.

Posted by Norris McDonald at 2:17 PM