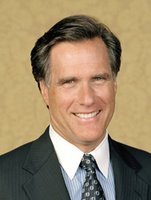 Mitt Romney, left, is a candidate for president and he supports nuclear power as a reasonable technology for producing electricity and mitigating the effects of global warming. In Boston.com Local News, former Massachusetts governor Romney is quoted as saying, "the nation is going to have to explore nuclear power sources again. I'm hopeful that as we invest in this energy sector, that here in Massachusetts we'll find ways to dispose of or to reuse the waste that comes from nuclear power plants." Romney supports expanding energy efficiency and alternative energy solutions including biodiesel, ethanol, nuclear, and coal gasification, and is in favor of drilling in the Arctic National Wildlife Refuge (ANWR) and the outer continental shelf to find more domestic sources of oil.

Boston.com also noted that the governor opposes the Cape Wind plant proposed for Nantucket Sound, which he says is a pristine, national treasure and tourist destination. He believed Cape Wind project would depress property values and damage the local economy by hurting tourism. But he supports similar projects in Princeton, Hull and other Massachusetts locations. AAEA supports the Cape Wind project and testified in support at the Federal Energy Regulatory Commission (FERC) environmental impact statement hearings at MIT in Boston. Romney is Mormon. (Wikipedia)

Posted by Norris McDonald at 8:20 PM