Angela McGlowan Should Adopt a Form of Cap & Trade 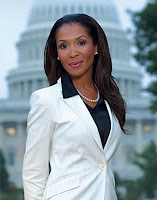 Black conservative FOX analyst and Tea Party candidate for the 1st Congressional District in Mississippi Angela McGlowan, right, opposes Cap and Trade and denies that global warming is a problem. She uses the talking point phrase of 'Cap and Tax' to slam the concept. Yet the concept of Cap and Trade has been promoted by conservatives such as former President George W. Bush and Vice President Dick Cheney. Their Clear Skies Initiative was a Cap and Trade proposal to control emissions. We supported that proposal too. A Cap and Trade program can be designed to unleash American innovation and create a significant number of new jobs. It is market-oriented and that is why Republicans and conservatives embraced the concept in the past. 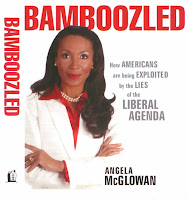 Although McGlowan has spoken against the reality of climate change mitigation and Cap and Trade as a tool to fight it, there is actually very little from her about the issue on the internet. Thus, we are left to assume that she is open to supporting a good Cap and Trade solution. She should know that Cap and Trade helps the technological solutions of emission free production of electricity through solar power, wind power and nuclear power. These technologies complement each other very well. We are also proposing a solution (Energy Defense Reservations) that would be complemented by a national commodity market in carbon dioxide and other greenhouse gases. McGlowan should also consider making her campaign carbon neutral via utilization of our CO2 offset trading house, the Carbon Mercantile Exchange (CMX).

Her book: Bamboozled: How Americans are being Exploited by the Lies of the Liberal Agenda
Angela McGowan Speaks At Tea Party Convention
Posted by Norris McDonald at 1:21 PM