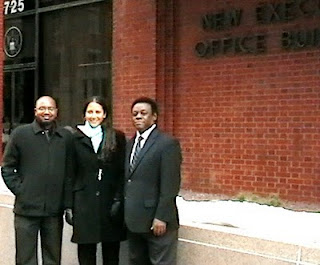 AAEA participated in a meeting on fly ash today with the Office of Management and Budget (OMB) that was organized by Earthjustice and held at the New Executive Office Building in Washington, D.C. Emily Enderle, Earthjustice Legislative Associate, coordinated the meeting between community stakeholders and representatives from OMB, EPA and the White House Council on Environmental Quality.

The goal of the stakeholders was to share stories with OMB from the environmental justice communities impacted by improper coal ash disposal. Stakeholders also illustrated how states have not done a good job protecting people and how we must move beyond the status quo.

Since receiving the proposed rule for review from EPA on listing fly ash as hazardous waste in mid-October, OMB has been meeting with industry representatives who do not want fly ash ruled as a hazardous waste. Stakeholders want a rule that is protective of human health issued as soon as possible so the public participation process can be initiated and so that the discussion based on speculation will come to an end. Stakeholders want a rule from EPA that defines fly ash as a hazardous waste with an exemption for beneficial reuse (concrete production).

AAEA President Norris McDonald gave a short presentation about beneficial reuse of fly ash. Daniel L. Cornelious, Jr. of the Howard University School of Law also participated in the meeting. Ms. Enderle gave a summary statement to conclude the meeting. Dr. Robert Bullard of the Environmental Justice Resource Center at Clark-Atlanta University, could not attend due to the weather. Leslie Fields, Environmental Justice Coordinator for the Sierra Club was scheduled to participate, but had a meeting conflict.

Coal Combustion Waste To Be Regulated
Posted by Norris McDonald at 4:20 PM