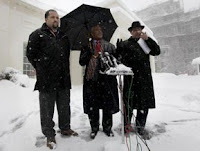 President Barack Obama met with African-American leaders in the Oval Office at the White House today to discuss jobs and the economy. The two feet of snow enveloping Washington, D.C. appropriately captured the unemployment situation in Black America. Included in the meeting were: Rev. Al Sharpton, president and founder, National Action Network; Benjamin T. Jealous, president, NAACP; Marc H. Morial, president and CEO, National Urban League. Dr. Dorothy I. Height, chairwoman, National Council of Negro Women, was invited but could not make it due to the weather.

"Obama shouldn’t be expected to create jobs programs exclusively for the black community. We’re not looking for a race-based program. We’re looking to make sure everyone is involved. ... We don’t expect him to be the black president. We expect him to be the American president of everyone, including blacks. I met with Bush. I met with Clinton. I don’t think I’ve seen a meeting this open and candid."

“The crisis of unemployment and underemployment among urban and minority communities has reached a devastating level and it continues to deepen. While the overall picture appears to be brightening, we cannot allow it to blind us to the worsening situation for black Americans. I believe our meeting today with President Obama has focused his attention more solidly on the plight of these neglected communities."

(Politico, The White Board, CNN)
Posted by Norris McDonald at 4:20 PM