John Boyd, left, president of the National Black Farmers Association (NBFA), led a black farmers rally on the steps of the state capitol building in Montgomery, Alabama on Wednesday February 10, 2010 to encourage Congress to spend $1.15 billion to help black farmers. Congressman Artur Davis (D-AL), right, spoke at the rally too.

The current conflict dates to 1999, when the USDA reached a settlement with black farmers in a discrimination case that alleged that the agency had denied federal loans, disaster assistance and other aid to certain farmers because of the color of their skin. (The agency is still fighting similar class-action suits filed by Latino and Native American farmers). The USDA approved about 15,000 claims and paid out about $1 billion, but has refused more than 70,000 claims that were filed after the October 1999 deadline. Farmers said they were given no notice of the deadline. The two sides have been fighting ever since. And despite a fairly scathing slap by the Government Accountability Office a few years ago, and President Obama more recently pledging to add an additional $1 billion-plus to the settlement fund as part of other Congressional bills, the cash still isn’t getting out to these farmers.

Claimants are still looking for their money, more than a decade after the federal Department of Agriculture reached a landmark settlement for having cheated generations of black farmers through “indifference and blatant discrimination.” The 1999 agreement on what is known as the Pigford class-action lawsuit was hailed as the biggest civil rights settlement in American history. The judge estimated a swift $2 billion payout — or $60,000 each — for victimized black farmers.

It has not worked out that way, as the White House’s new budget confirms with a request for $1.15 billion to pay still-pending claims from black farmers. The same amount was requested last year but did not survive Congressional budget cuts. The class-action suit detailed how eligible black farmers traditionally were denied loans by the agriculture agency while their white peers went to the head of the line for growing-season wherewithal and homestead improvements. After the settlement, some farmers got their money, but far too many ran into a new buzz saw. They were stalled and rejected through paperwork technicalities, tight deadlines and a lengthy appeals process that officials insisted was necessary. There was early confusion within the Obama administration about whether the settlement process had been capped, but Agriculture Secretary Tom Vilsack insists no; the aim, he says, is to finally “close this unfortunate chapter.” 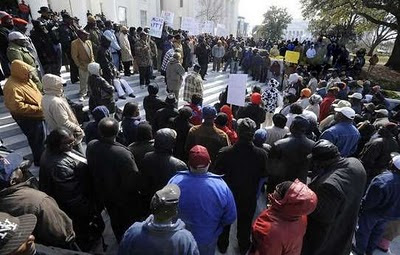 In 2008, then-Illinois Sen. Barack Obama sponsored legislation to reopen the application process and added $100 million to the U.S. Farm Bill to begin the process. The Justice Department has since claimed in court filings that the $100 million is a cap on any payments. John Boyd, president of the National Black Farmers Association and the Congressional Black Caucus disagreed. President Obama’s federal budget proposal includes $1.15 billion in funding for discrimination claims. But the funding is not yet attached to a bill that would make the dispersal of the money a law.

The Department of Justice is still working on terms of a settlement that will play a large role in how the claim system works and how the money is distributed. Boyd estimates there are 30,000 black farmers who make a full-time living by farming and another 100,000 who are part-time farmers. (NBFA Emails, Montgomery Advertiser, Photos: Montgomery Advertiser, Mickey Welsh)
Posted by Norris McDonald at 5:36 PM