The Group of 10 Gives Responses to Environmental Justice 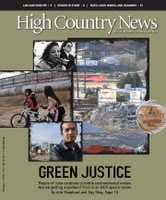 AAEA sent a Green Group Diversity Survey to environmental groups in 2003 and we developed a Green Group Diversity Report Card from that survey. Only five of twenty five groups bothered to respond, but now some groups have posted their environmental justice bona fides in "High Country News" magazine. Basically, some of the groups with some pride in their records on minority hiring, retention and programmatic outreach posted in the magazine and responded to our survey. Our most significant complaint is that no matter the group, we estimate that they commit less than 1% of their massive budgets to issues related to the most impacted communities in the United States. A group's priorities are reflected in their budgets and staffing. As such, environment justice is really not a priority for the green groups.

Of course, we understand their motivation to advertise their efforts during Black History Month after the first year of the first African American president. Yet we are left to conclude that the environmental movement remains one of the most segregated sectors in American society. We are not aware of even a handful of policy professionals among the groups. However, the groups that received a good grade on our Report Card and are featured in "High County News" include: Environmental Defense Fund and Natural Resources Defense Council. World Resources Institute received a 'Good' rating and Environmental Law Institute received and 'Excellent' rating in our Report Card. The Chesapeake Bay Foundation received a 'Poor' rating and arrogantly refused to answer our survey.

If the mainstream green groups can cruise through four to eight years of an Obama administration without changing their discriminatory hiring practices and racially insensitive operations, they will have quite the laugh on the president, EPA Administrator Lisa P. Jackson and Attorney General Eric H. Holder. Yet, even as these green groups sue the administration in pursuit of environmental goals, so too should the adminstration investigate any group that receives federal funding and discriminates. It is easy to ignore us, but we doubt it would be so easy to ignore the Obama administration.
Posted by Norris McDonald at 8:16 AM