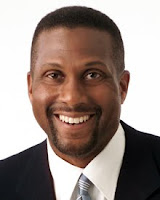 Al Sharpton and Tavis Smiley 'go at it' in public over what the reverend and others said after their meeting with President Obama in the Oval Office at The White House.

Tavis Smiley's "The Black Agenda is the American Agenda" will take place on Saturday, March 20, 2010, 8am (CT), on the campus of Chicago State University at the Emil and Patricia A. Jones Convocation Center. Tavis' morning radio show that sparked the 'debate' is also at the link above.

Hat tip to Booker Rising.
Posted by Norris McDonald at 10:08 AM