Why Are the Kennedys Trying To Kill Wind Power? 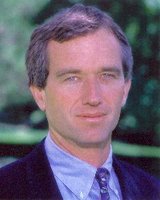 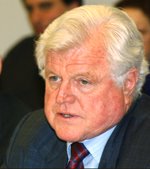 Senator Edward Kennedy and Robert Kennedy, Jr. are doing everything they can to kill a wind power project being planned offshore from the Kennedy compound in Hyannis Port. The wind turbines will hopefully be built in Nantucket Sound about six miles offshore from the Kennedy property in Massachusetts. Evidently, the Kennedys do not want this alternative green power project in their backyard because they believe it will spoil their views, sailing and yachting. And minorities have the nerve to complain about toxic waste sites in their neighborhoods. Don't they understand how the rich are suffering?

AAEA believes this project is so important that we went to Boston to support it at a Federal Energy Regulatory Commission (FERC) hearing. The Cape Wind Project will be the first offshore wind project in America if it is built. If the project is killed it could end such development projects and would be a major blow to windpower development. Rep. Don Young, R-Alaska, has also called for a ban on all wind turbines within 1.5 nautical miles of shipping and ferry lanes. It is aimed to kill the Cape Wind Project.
Posted by Norris McDonald at 5:56 PM No comments:

EPA Administrator Stephen Johnson released President Bush's 2007 budget request for the agency on Feb 6, 2006. AAEA President Norris McDonald attended the announcement at EPA Headquarters. The request is for $7.3 billion. Critics will complain that the figure is down slightly from previous years but we believe EPA can operate sufficiently with that amount of money.

Just think, $7 billion over the last 20 years is $140 billion. That seems like a lot of money to us. And EPA is celebrating its 35th anniversary this year. As the first president to regulate Mercury, we hope this administration will continue to propose, implement and fund innovative environmental protection programs.
Posted by Norris McDonald at 11:37 AM No comments: 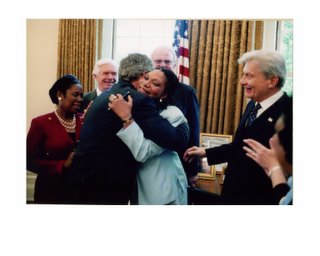 (Photo: President Bush hugs Ms. Adebayo in the Oval Office after signing the bill into law)
What is going on betweeen EPA and Marsha Coleman Adebayo? Adebayo won a $600,000 court judgement against EPA for discrimination during the Clinton Administration. She went on to form the No Fear Coalition and psssed the '1st Civil Rights Legislation of the 21st Century," the NO FEAR Act of 2002.
Now there is a conflict regarding her continued employment and work situation. Ms. Adebayo, who became ill during this conflict, currently works from home and the agency wants her to work at the EPA offices. Ms. Adebayo has high blood pressure and had to be taken away by ambulance the last two times she was ordered back into the office. Although this conflict is currently in litigation, we believe that EPA should just offer Ms. Adebayo a settlement package and end the stalemate. We hope this administration will provide a happy ending to the pending movie about this entire affair.

The script commissioned by actor/activist Danny Glover is complete and the movie is on the fast track to production. It is just ashamed that this entire situation could have been avoided if Clinton administration EPA Administrator Carol Browner had not been totally dismissive of Ms. Adebayo's claims. No Fear: The Movie, coming to theatres soon.
Posted by Norris McDonald at 9:11 AM No comments: 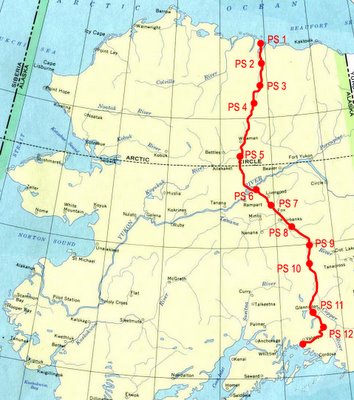 Surely you have heard about the ongoing fight over drilling in the Arctic National Wildlife Reserve (ANWR), but we bet you aren't aware that the U.S. has been pumping oil out of Alaska as much as possible since 1977. The Trans-Alaska Pipeline, operated by The Alyeska Pipeline Service Company, runs 800 miles from Prudhoe Bay on Alaska's North Slople to Valdez at the Gulf of Alaska. We get approximately 17 of our domestic crude oil from the pipeline. Tankers deliver the oil to West Coast refineries.

Although blacks have virtually no equity in any energy projects, Art Mitchell is the Chief Financial Officer at Alyeska. What does Alaskan oil mean to black people? A natural gas pipeline is currently being planned. Why don't blacks own any of America's energy infrastructure? Are there opportunities for ownership of resources in any future development at ANWR? Or do you prefer that ALL of the Alaskan tundra should be preserved for the caribou? PS is pumping station
Posted by Norris McDonald at 7:12 PM No comments:

History will write that the new environmental movement came from those working effectively to fight global warming. These 21st Century energy revolutionaries are rising up from the pronuclear power ranks to aggressively promote an off-the-shelf technology that simultaneously provides the electrical power America needs while not producing any greenhouse or smog producing gases. These pronuclear champions are the new generation of environmental activists.

While Laurie David and Leonardo DiCaprio are promoting electric vehicles - - the other half of the solution to stemming climate change - - they are afraid of offending their friends by embracing nuclear power, which is the only viable option for providing power to millions of people without producing air pollution and greenhouse gases. Unfortunately, Robert Kennedy, Jr. is working to kill the wind industry via his opposition to the Cape Wind Project in Nantucket Sound. And the photovoltaics industry will never take off because a state would have to be covered with panels to produce significant power and they still wouldn't produce power 70% of the time. We love solar and wind at AAEA though for specialty power uses and supplemental electricity.

Fortunately, there is a new sheriff in town and that is the North American Young Generation in Nuclear. Furthermore, these mostly young people are seriously taking their case to the streets. If the world is to be saved from the most serious environmental issue facing us today, global warming, do not look to the traditional environmental groups for serious solutions to this problem because they refuse to free themselves from impractical dogma. So go NAYGN. Show America and the world that nuclear power is the way to go. These new environmentalists rule.
Posted by Norris McDonald at 11:30 AM No comments: