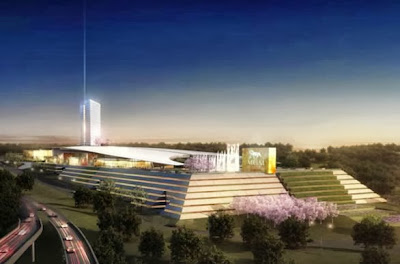 MGM Resorts International unveiled architectural renderings Wednesday for an $800 million casino and resort overlooking the Potomac River at National Harbor, the waterfront development in Prince George’s County.  The company is in the running for a casino license from Maryland that will allow for table games as well as 3,000 slot machines, a result of a decision last year by state and county voters to approve an expansion of gambling in Maryland.

To pick a site, the Video Lottery Facility Location Commission (more) plans to visit three locations in Prince George’s next month: National Harbor, Rosecroft Raceway and a vacant parcel in Fort Washington. The commission then plans to hold a series of public hearings to gather input before a selection, possibly by the end of the year. The new casino would be the state’s sixth, and it could open by mid-2016.


MGM’s plans call for an 18-story glass tower hotel, a seven-story parking garage and a pedestal “designed to evoke the plinth of a grand monument” like those along the Mall. In addition to the casino and hotel, the project would include restaurants, entertainment, upscale retail and a spa.

The complex, which would stretch 1,500 feet, would also include a reflecting pool with fountains that could be used for ice-skating in the winter.

The two other bidders for the Prince George’s license are Penn National Gaming, which owns Rosecroft Raceway, and a newly formed subsidiary of Greenwood Racing, which owns a Parx Casino north of Philadelphia and has proposed a similar venue on a 22-acre parcel at Indian Head Highway and Old Fort Road.  (Wash Post, 9/25/2013)
Posted by Norris McDonald at 5:35 PM No comments:

George Gurley, an ex-military River Terrace resident and environmental champion for the community died in 2009.  Gurley had a notable career in the United States Air Force.  As a fixture in River Terrace, Gurley organized a local groups called Urban Protectors to fight against the Potomac Electric Power Company (PEPCO) Plant to prevent them from expanding two oil-fired generators at the Benning Road plant.  He also fought against expansion of a waste-transfer station.


﻿
George Gurley, along with energy expert A. Bernard Jones briefed the  community on
air quality issues related to the  PEPCO plant across the street from the community.


River Terrace is across the street from the 77-acre Pepco plant that has been sitting on the north side of Benning Road NE for over a century.   The peaking plant only operated a few weeks every year, but in 2007, Pepco Holdings announced that it would shut down the turbines and smokestacks entirely.  Gurley had fought for closure of the generators since the 1970s. Gurley organized his own health assessment that found elevated levels of asthma, bronchitis, and cancer in the surrounding neighborhoods.

That prompted the federal Agency for Toxic Substances and Disease Registry to do its own health assessment of the River Terrace neighborhood. The study found enough air pollution to aggravate existing health conditions, but concluded that it didn’t have enough data to blame the plant for the health conditions Gurley had found in the community. As federal bureaucracies are wont to do, it recommended further study.  That never happened. And the District’s own arrangements with Pepco don’t require more investigation. After Gurley's death, there hasn’t been much discussion of the plant since then.

AAEA worked with George Gurley in 1990 to organize and host the first Earth Day event in Washington, DC to coincide with the National Earth Day event on the National Mall. Reverend Jesse Jackson and Mayor Marion Barry addressed the gathering, which was held at the River Terrace Elementary School. (Washington City Paper, Oct 12, 2011, East of the River, September 2009, )
Posted by Norris McDonald at 10:51 PM No comments: 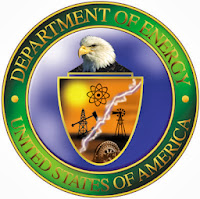 The Department of Energy is launching a national dialogue to address pathways forward in expanding engagement of minorities in the energy sector. The Minorities in Energy Initiative will link together representatives from diverse community organizations, academia, business, and industry to provide their individual perspectives to address shared challenges in the areas of energy economic development, STEM education, and climate change.

The Minorities in Energy Initiative will be a continuous conversation between several federal agencies and private partners, with Energy at the helm. The Initiative will ick off with Secretary Ernest Moniz at the Department of Energy headquarters in Washington, D.C. on September 24, 2013. Additionally, the conversation will be streamed live on www.energy.gov/live from 11am-12pm EST.

The launch will be held in conjunction with the Department’s Hispanic Heritage Month Commemorative Program, and Secretary Moniz will convene a panel of industry leaders to address energy issues. In the afternoon, attendees will be engaged afternoon workshops on the topics of energy economic development, STEM education, and climate change. (DOE)

Posted by Norris McDonald at 11:32 AM No comments:


The $27-million, three-year deal will send 528 county inmates serving long-term sentences to five fire camps, jointly operated with the state prison system, that are scattered across the county.

Supervisors acted after some complained about the increasing number of criminals -- including some serving time for violent offenses -- who are being released after serving a fraction of their sentences.

Inmates coming to the county under realignment now make up 32% of the county's jail population. They are required to complete their full sentences, but now will be eligible to serve time in selected fire camps. That will free up county jail beds so other inmates can serve more of their sentences.  (L.A. Times, 9/17/2013)
Posted by Norris McDonald at 8:29 PM No comments:

Washington is a Columbia, S.C., native, graduated from the University of South Carolina and had a successful career as a corporate executive at Altria Corporate Services, Inc. (the parent company of Philip Morris USA).  Washington became vice president of external affairs at Altria before retiring after 22 years in 2008, at age 45, to pursue a career as an entrepreneur.  Shuanise started Washington Solutions, LLC, a consulting firm that provided management and development services to small, medium and large businesses, governments and non-profit organizations.

Washington helped steer significant financial support to the organization resulting in Altria becoming its first major corporate sponsor. Altria’s philanthropy propelled Washington on the CBCF Board of Directors, first as treasurer and later as vice president.    She served as the board chair upon the death of Rep. Donald M. Payne in March 2012.

Founded in 1976, the Congressional Black Caucus Foundation, Inc. (CBCF) is a nonprofit, nonpartisan public policy, research and educational institute that aims to help improve the socioeconomic circumstances of African Americans and other underserved communities. With the support of the African American members of Congress, which today total 46, the CBCF develops programs and research to address public health concerns, economic empowerment and health disparities. Fellowship and internship programs expose African American students and professionals to public policy and public service opportunities on Capitol and in state and federal governments. (Washington Informer, 9/11/2013)
Posted by Norris McDonald at 11:03 AM No comments:

The Congressional Black Caucus Foundation, Inc. (CBCF) will reveal its $5 million investment in African-American banking institutions as part of a broader effort to increase the availability of loans for businesses and individuals in African-American communities. CBCF is targeting banks in four regions of the country--the North, South, East and Midwest--in an attempt to achieve geographic balance in an initiative that could prove crucial in lifting the economic fortunes of Black communities. In all, five banks will receive $1 million each. (U.S. Black Chambers Press Release)
Posted by Norris McDonald at 10:00 AM No comments: 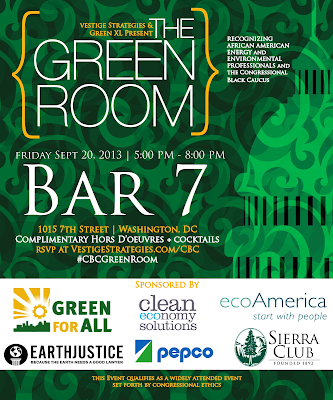 Posted by Norris McDonald at 10:44 AM No comments:

I just received this message from Dru Ealons:


"Tomorrow, September 10th is my last day in the office. It has been an honor to serve during this historic time as a presidential appointee for President Barack Obama at the US Environmental Protection Agency. As one of the agency’s key stakeholders, working with you has been both rewarding and educational. Thank you again for working with EPA’s Office of Public Engagement…insuring that those you represent voices are heard. I value your insight and I’m glad our paths have crossed."

Dru this town will not be the same without you.  You have been a superstar at EPA's Office of Public Engagement.  Clearly everyone knows that former EPA Administrator Lisa Jackson could not have operated the agency without you.  I was impressed with you from the moment I met you and you more than lived up to my expectations.  Having been in this town for over three decades, I can say you have been a breath of fresh air...like a Spring breeze freshening the halls of EPA.

I will miss you Dru.  You cannot be replaced.  Someone else might take up the position, but know that in my mind, you can never be replaced.  You always had a friendly smile, a helpful demeanor and a youthful enthusiasm for the job.  You also made sure that our little group was kept 'in the loop.'  And for that I will always be thankful.  Do know that you are appreciated.  Please do not forget about us and if I can be of assistance to you in any way in the future, please do not hesitate to contact me.

I look forward to seeing you tomorrow at the 'Celebrating Dru Ealons' event.
Posted by Norris McDonald at 4:16 PM No comments:

A Message From Kristin Davis

Promotion:Donate at least $20 from 9/2 at 9am ET to 9/5 at 11:59 pm ET and you’ll be automatically entered for a chance to win an Autographed Photo of Kristin Davis and an Elephant.

Did you know that elephants will soon be extinct? Every 15 minutes an elephant is brutally killed for it's tusks. Everyday elephants are being attacked by poachers with poisoned arrows, spears, deadly snares and guns.

The David Sheldrick Wildlife Trust is fighting to protect these majestic animals in Kenya everyday. Our anti-poaching teams need a helicopter to respond quickly to wounded elephants and to catch the poachers and have them arrested.

Every dollar raised goes directly to the efforts of the DSWT team on the ground in Kenya.

We are in a crisis because there isn't much time to save the elephants.

Organized criminal and war lords like Joseph Kony are killing elephants to fund their illegal activities. So not only are we in danger of loosing a beautiful , intelligent animal, but more innocent people will suffer because of the money made from selling the ivory on the back market.

We must fight together against the bad guys before they win and we loose the elephants in the wild forever!

Every dollar means so much, thank you for your support

(Crowdwise)
Posted by Norris McDonald at 7:32 PM No comments: