The U.S. Nuclear Regulatory Commission (NRC) met today in an Affirmation Session and voted to approve a Nuclear Waste Confidence Rule that allows nuclear companies to continue to store nuclear waste on site until a national repository can be contructed.  NRC also lifted the moratorium on licensing nuclear power plants.

The Commission approved a final rule and its associated generic environmental impact statement (GEIS) amending 10 CFR Part 51 to revise the generic determination on the environmental impacts of continued storage of spent nuclear fuel beyond the licensed life for operation of a reactor, with the changes in attachment 5.

In implementing the published GEIS findings into site-specific environmental analyses, the staff should utilize approaches that are transparent to the public on how these impact ranges are considered for each specific site.

The Commission approved a direct final rule and the companion proposed rule amending 10 CFR Parts 30, 37, 73, and 150 to remove the Safeguards Information – Modified Handling (SGIM) designation of the security-related information for large irradiators, manufacturers and distributors, and for transport of category 1 quantities of radioactive material, with the changes in attachments 1 and 2. Storage Spent Nuclear Fuel–Memo & Order Final Licensing Decisions & Pending Contentions

The Commission approved a Memorandum and Order lifting the suspension on final licensing decisions that the Commission imposed in CLI-12-16 as of the effective date of the Continued Storage Rule, and providing direction with respect to “continued storage” contentions that are currently held in abeyance in twenty-one adjudications before the Commission and the Atomic Safety and Licensing Boards. (Subsequently, on August 26, 2014, the Secretary signed the Memorandum and Order.)

The Commission approved a direct final rule and companion proposed rule amending 10 CFR Part 50.2 to add SHINE Medical Technologies, Inc.’s (SHINE) proposed accelerator-driven subcritical operating assemblies to the definition of a “utilization facility,” subject to the changes in attachments 3 and 4. This rule will allow the U.S. Nuclear Regulatory Commission (NRC) staff to conduct an efficient and effective licensing review of the SHINE construction permit application and subsequent operating license application under 10 CFR Part 50, “Domestic Licensing of Production and Utilization Facilities.”

As noted in the GEIS, the former “Findings” were outputs of previous Waste Confidence proceedings, which included an environmental assessment and finding of no significant impact. In contrast, the current GEIS provides a detailed analysis under NEPA and provides an analysis of specific impacts.’

...the Commission has concluded in this GEIS that deep geologic disposal remains technically feasible.

This analysis does not constitute an endorsement of an extended timeframe for onsite storage of spent fuel as the appropriate long-term solution for disposition of spent fuel and high-level waste.’

...does not imply that spent fuel cannot be stored safely. To the contrary, the analysis documented in the GEIS is predicated on the ability to store spent fuel safely over the short-term, long-term, and indefinite timeframes. (NRC)

Days before the Affirmation Session, several environmental groups attempted to delay the meeting until after NRC Commissioner Willim (Bill) Magwood in a futile attempt to garner enough votes to defeat the approve of the rule.  Commissioner Magwood's last day at NRC is August 31, when he leaves to head the Nuclear Energy Agency.

AAEA supported holding the meeting during its August 26 assigned time and supported approval of the Waste Confidence Rule.
Posted by Norris McDonald at 12:27 PM No comments: 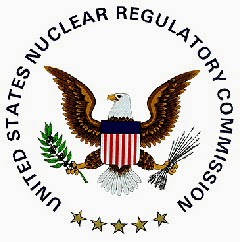 Posted by Norris McDonald at 11:41 PM No comments:

Posted by Norris McDonald at 9:24 PM No comments:

There are plans to develop the McMillan Sand Filtration Plant site near Howard University and Children's Hospital in Washington, D.C.  The D.C. Zoning Commission is reviewing the latest plan (www.envisionmcmillan.com).  The D.C. Historic Preservation Review Board has already approved the design.

The federal government closed the water purification facility in 1986 and sold the 25-acre site to the District of Columbia.  Between 1907 and 1911, shortly after the 92-acre McMillan reservoir and filtration plant were built.  The original accessible, landscaped spaces were fenced off and permanently closed to the public during World War II for security reasons and the reservoir has remained fenced and inaccessible.


﻿
Two underground sand-filtration cells — vaults constructed of unreinforced concrete — will be structurally stabilized, as will all 24 of the cylindrical sand storage bins and four regulator houses visible atop the existing, elevated site. The video above captures the entire site plan. (Wash Post, 8/1/2014)

AAEA support the proposal.
Posted by Norris McDonald at 12:30 PM No comments: