Originally elected at the age of 38, Foxx is the youngest mayor of Charlotte, and is the first Democrat to hold the office sinceHarvey Gantt left office in 1987.  He is Charlotte's second African American mayor, as well as its first newly-elected mayor since 1995. On April 5, 2013, he announced that he will not seek reelection as Mayor in 2013.

He graduated from Davidson College, where he was the first African American student body president, with a degree in history, in 1993, and earned a law degree from New York University School of Law in 1996.

After law school, Foxx returned to Charlotte to work for a short time at the Smith, Helms, Mullis, and Moore law firm, and left to become a clerk for Judge Nathaniel R. Jones of the Sixth Circuit Court of Appeals in Cincinnati. Later he worked for the United States Department of Justice and the United States House of Repressentatives Judiciary Committee.  In 2004, he was the campaitn manager for Representative Mel Watt.

In 2001, he returned to Charlotte to work as a business litigator for Hunton & Williams. While a member of the city council, he retained his position as a litigator at Hunton & Williams, switching to part-time status.  In 2009, he left Hunton & Williams to join DesignLine Corporation, a hybrid electric bus manufacturer, as its Deputy General Counsel.

Foxx is married to Samara Ryder, also an attorney; they have two children. (Wiki)
Posted by Norris McDonald at 9:59 AM No comments:

Trees turn out to be a telling barometer of income inequality in the Washington area, data shows.

A clear fault line has emerged, beginning at upper 16th Street in Northwest and following the Potomac River south of the city. In the Northwest quadrant of the city and into the Virginia and Montgomery County suburbs, trees are abundant and the land well-planted. To the east, in the lower-income areas of the District and into Prince George’s County, the tree canopy is much sparser and there is far more open land.

In the lower-income areas of the District — which has one of the highest levels of income inequality among the nation’s cities — nearly 40 percent of residents who make $60,000 or below live in places with fewer trees and more empty spaces.

Meanwhile, 80 percent of residents in upper-income areas live in well-planted neighborhoods, data show.  (Wash Post, 4/25/2013)
Posted by Norris McDonald at 8:47 AM No comments:

John Bennett and Robert Huber Think They Should

When Robert Huber published a controversial article, “Being White in Philly,” in Philadelphia Magazine, Philadelphia Mayor Michael Nutter objected, even after previously inviting a conversation on race in public statements.

(Read the full article)
Posted by Norris McDonald at 5:11 PM No comments:

I've met many celebrities in my life, from presidents to Hollywood, but my favorite is Dick Gregory.  Why?  Because of who Dick is and the way he carries himself.  Being an Inside The Beltway creature, I've met people over the years who have trouble walking through regular doorways because their heads are so big.  Yet Dick has never exhibited any hint of being overly impressed with himself.  In fact, he goes out of his way to make you feel good about yourself.  And Dick isn't even a politician.  Politicians are expert at this too, but you know they are acting.

Dick Gregory is the Godfather of Environmental Justice.  Dick was out talking about the environment before the environmental movement even began.   Dick was ahead of Marvin Gaye's "What's Going On" album that featured an ecology theme.  Dick was one of the first black megastars and he could have developed his initial success into "The Cosby Show" or "The Flip Wilson Show" or any of a number of other projects.  Instead, Dick wanted to be free to express himself however he wanted to.  And in my opinion, such freedom is worth the price of admission. 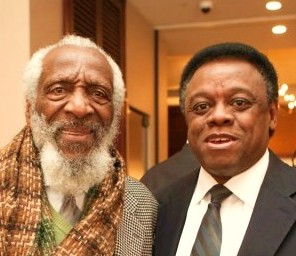 When I almost died from asthma in 1991, Dick helped me get credit at a health food store (that stuff is expensive).  He advised me on nutrition.  He would give me rides home (in a Rolls Royce). It would be funny when we would stop at a light and someone would pull up to us and say, "you look like Dick Gregory."  And Dick would respond, "I am Dick Gregory."  And we all would bust out laughing.  These are priceless moments.  And Dick shared them freely.   Dick would let me hang out with him.  He would say, "come on and ride with me Norris to the airport to pick up a package."  And off we would go to Dulles Airport.  If I was driving my car, Dick would entertain my son play with his feet while he was sitting in his car seat.  He would slip a few dollars to the homeless people we passed on the street.  Dick showed me how it SHOULD be done.

Dick was talking nutrition to black folks when the thought of eating as much raw food as possible was laughed at by our peeps. Dick got me into juicers and fasting and colonics. Dick had me taking 40 supplement pills per day at one point.  When I showed doubt about this regimen, he got his wife, whom he called Lil (Lillian) on the phone to "tell Norris we've been doing this for years."

One of my favorite times with Dick was when he discovered a black scientist who could 'turn water gasoline' (into a synthetic fuel).  One evening, right across the street from the Howard Inn, we used my car as the test vehicle.  Dick had his astrologer there to read the signs.  Walter Fauntroy was there too.  The unit worked in powering my car and the exhaust was water vapor.  My guess is it was some sort of hydrogen derived fuel becuase its waste production after such combustion is water vapor.

Dick is 80 years old now and still going strong.  Thank you Dick.  Thank you for being you and sharing yourself with me.  When I had to downsize my ambitions in response to asthma and single parenthood, Dick showed me how I could still express myself and have a very good time doing it.  Dick also showed me how to speak truth to power.  After my dear late father, I could not have a better professional mentor and role model than Dick Gregory.
Posted by Norris McDonald at 9:47 AM No comments: 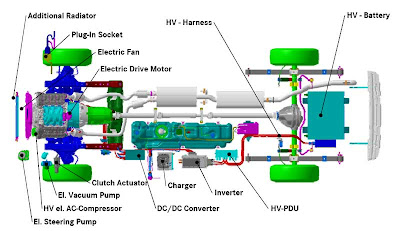 In 14 years, California says there will be 1.4 million EVs or plug-in hybrids on its roads. Of those, California says there will be 500,000 fuel-cell or pure electric vehicles on the roads. The Air Resources Board expects that nearly 100 percent of all cars sold in the Golden State will be zero-emission vehicles by 2040 under its rules. (The Detroit News, 4/16/2013)
Posted by Norris McDonald at 11:06 AM No comments:

Washington, DC: The Executive/Program Assistant is a unique high-level administrative position that

provides support to both to the Campaigns Director and the Director of Public Outreach. The Campaigns Director and the Director of Public Outreach together manage the entirety of the Program Department at Greenpeace USA. This position manages the CD and DPO’s time, correspondence, travel and speaking engagements. The Executive/ Program Assistant would require someone who is proactive, takes initiative, and has the ability to work in a fast-paced, team-oriented environment while juggling and coordinating multiple projects and deadlines. The incumbent must also have keen problem solving skills, and work independently. The Executive/ Program Assistant works directly with both Executive Team members in support of their work with the Executive Team, Senior Management Team and the Program Management Team. This position is also responsible for administrative duties related to operations of the Program team including note taking, facilitation, budget tracking and scheduling.

Greenpeace USA values a healthy work-life balance and has flexible, family-friendly employment policies. Our competitive benefits package for full-time employees includes medical, dental, and vision coverage with low contributions from staff. We have options for pre-tax flexible spending accounts for medical and dependent care costs. Greenpeace employees enjoy generous 401K matching and time off for vacation, sick, personal, and parental leave. After five years, staff are eligible for a paid sabbatical. To encourage public transportation use and biking, we offer subsidies for staff who choose to bike or ride mass transit to work. Greenpeace is committed to the growth and development of staff and fostering a creative workplace culture. For more information, check out our benefits plan.

Please send cover letter and resume to resumes@wdc.greenpeace.org. Please include the following in your cover letter: a specific explanation of your interest in Greenpeace’s mission and the available position and how you found out about this career opportunity. Please use the email subject line: Executive Assistant Position– YOUR NAME. Applications are accepted until April 30th. No phone calls please. (Greenpeace)
Posted by Norris McDonald at 10:05 AM No comments: