Dr. Marsha Coleman-Adebayo appears on the Tavis Smiley Show tonight to discuss her new book, "No Fear: A Whistleblower's Triumph Over Corruption and Retaliation at the EPA." 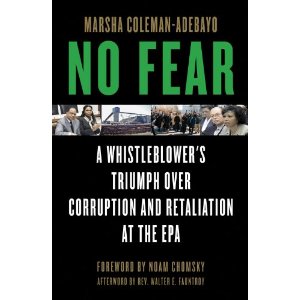 Marsha Coleman-Adebayo, left, was a senior policy analyst for the United States Environmental Protection Agency‎ (EPA). Beginning in 1996, she filed complaints alleging that a company from the United States was mining vanadium in South Africa and harming the environment and human health. The EPA did not respond, and Coleman-Adebayo reported her concerns to other organizations. Coleman-Adebayo filed a suit against the agency, alleging racial and gender discrimination. On August 18, 2000, a federal jury found EPA guilty of violating the civil rights of Coleman-Adebayo on the basis of race, sex, color and a hostile work environment, under the Civil Rights Act of 1964.

Coleman-Adebayo is a founder and leader of the No FEAR Coalition. Through her leadership, the No FEAR Coalition, working closely with Representative James Sensenbrenner, organized a successful grass-roots campaign and secured passage of the “Notification of Federal Employees Anti-discrimination and Retaliation Act,” the first Civil Rights Law of the 21st Century. The Act was signed into law by President George W. Bush in 2002. (Wiki) 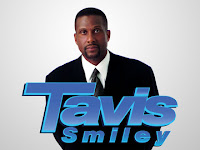 Author Tavis Smiley hosts the late-night news program, conducting interviews with newsmakers, politicians and celebrities. His goal to ``introduce Americans to each other'' offers stimulating conversations with diverse trendsetters and opinion-makers from the worlds of arts, entertainment, politics and media.

Political commentator Tavis Smiley offers in-depth analysis of topical issues and interviews with newsmakers of the day. (Wash Post)
Posted by Norris McDonald at 10:22 AM