Washington, DC - The organizers of the OccupyEPA and NOW DC will gather at Franklin Square Park (13th and I Streets NW) at noon on Friday, March 30, 2012 and march down 12th Street NW across Pennsylvania Avenue to rally on the EPA Headquarters front lawn on 12th Street at l:00 pm (outside the Federal Triangle Metro stop).
Four demands of the group are to:

Stop the WAR on Whistleblowers; Stop POLLUTING Low-Income Communities
Protect the CIVIL RIGHTS of Federal Employees
Protect PEOPLE, the PLANET and NOT Corporate Profits, and
Justice for TRAYVON MARTIN

Noam Chomsky, professor MIT, American linguist, philosopher, historian and activitist, has thrown his full support behind the march and rally by endorsing the action with a promotional video asking people to come out and join the group. This is in light of the President's recent decision to go forward with building the southern portion of the Trans-Canadian Pipeline and emphasizes the importance of speaking out now to protect our planet so that our children can have a future. Joining the march is well-known environmental activist Ralph Nader. Dr. Marsha Coleman-Adebayo, President of the "No Fear Institute" and author of "No Fear: A Whistleblowers Triumph Over Corruption at the EPA," and Susan Morris, civil rights activist and EPA Whistleblower, are Co-Chairs of the OccupyEPA march and movement. Speakers also include: Dr. Helen Calidcott, co-founder of "Physicians for Social Responsibility," an organization of 23,000 doctors committed to educating their colleagues about the dangers of nuclear power, weapons and war; Dr. Margaret Flowers, organizer of "OccupyWashingtonDC" and "NOW DC", a Congressional Fellow for Physicians for a National Health Program (PNHP), and a Board member of "Healthcare-Now". Kevin Zeese, a co-Director of "Fix Our Economy.US", attorney and long-time advocate on a broad range of social-economic-justice issues and on the steering committee of the "Bradley-Manning Support Network; Joe Carson, a Department of Energy Whistleblower and activist for justice; Alexis Baden-Mayer representing the "Organic Consumers Association"; Lisa Longo an activist against fracking; Lawrence Lucas, "U.S. Department of Agriculture Coalition of Minority Employees" and supporter of Black farmers; King Downing, attorney and representative of the "Human Rights-Racial Justice Center"; Patrick McCann, a representative from "Veteran's for Peace"; and a representative from the "Gray Panthers" and OccupyWashington, OccupyDC and OccupyEPA groups. 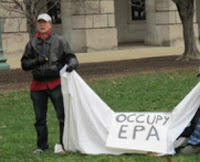 The presence of hundreds of people at the EPA on March 30th will send a clear message that the 99% are watching and are demanding that the EPA do it's job to protect people and the planet instead of corporate profits. Participants will carry signs telling the EPA why a sustainable future is important to them - for the lives of their children and future generations, for the beauty and diversity of plant and animal life, for clean air and water. The struggle of the 99% is a struggle for justice and for the very existence of human life on the planet. The EPA represents some of the worst policies put forth by the 1% - those that exploit people and the planet for greed and profit. We will not allow this practice to continue.

The organizers are asking families to join the march that will include live alpaca and "Snowflake the Polar Bear." There will also be music and entertainment.