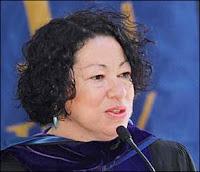 “assuming the EPA has determined that power plants governed by the Phase II Rule can reasonably bear the price of technology that saves between 100-105 fish, the EPA, given a choice between a technology that costs $100 to save 99-101 fish and one that costs $150 to save 100-103 fish. . . could appropriately choose the cheaper technology on cost-effectiveness grounds.”

On this issue, Sotomayor remanded to the EPA, finding it “unclear” how the EPA had arrived at its conclusions and, in particular, whether the EPA had improperly weighed costs and benefits.

Sotomayor also held that the EPA could not consider restoration measures - such as restocking fish to compensate for fish killed by an intake system - when determining the best technology available for a particular power plant. Sotomayor wrote that “[r]estoration measures are not part of the location, design, construction, or capacity of cooling water intake structures, and a rule permitting compliance with the statute through restoration measures allows facilities to avoid adopting any cooling water intake structure technology at all, in contravention of the Act’s clear language as well as its technology-forcing principle.” Finally, Sotomayor also determined that, at a minimum, EPA’s determination that the CWA provision at issue applies to existing and new facilities was a reasonable interpretation of the statute.

The industry plaintiffs filed petitions for certiorari, which the Supreme Court granted in April 2008 to review the cost-benefit issue. AAEA attended the December 2, 2008 Oral Arguments at the U.S. Supreme Court. By a vote of 6-3, the Court reversed. In an opinion by Justice Scalia, the majority deemed “[i]t . . . eminently reasonable to conclude that” the CWA’s silence with regard to determining the best technology available “is meant to convey nothing more than a refusal to tie the agency’s hands as to whether cost-benefit analysis should be used, and if so to what degree.” [Source: Supreme Court of the U.S. (SCOTUS) Blog], (Photo: Pace University)
Posted by Norris McDonald at 10:10 AM