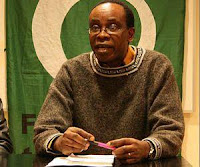 In an article by Naomi Klein, right, in Grist magazine entitled, "Naomi Klein Says Obama’s Stiffing Africa On Climate," she cites Nigerian poet and activist Nnimmo Bassey, left, Chair of Friends of the Earth International, in criticizing President Obama's approach to climate change mitigation. She states that President Obama's climate team is, "working tirelessly to do away with the Kyoto Protocol, replacing it with much weaker piecemeal targets." That sounds a bit harsh considering the Copenhagen conference is intended to produce a follow-up to the Kyoto Protocol, which expires in 2012. Plus, President Obama cannot offer targets more stringent than those being proposed by the U.S. Congress (17%-20% reduction by 2020). We do understand complaints by African nations about not enough money being committed to them for climate change mitigation ($10 billion). China has the same complaint.

But we really disagree with Mr. Bassey's recommendations. Klein's quotes by him:

The solution for Bassey is not carbon trading or sinks but “serious emissions cuts at the source. Leave the oil in the ground, leave the coal in the hole, leave the tar sands in the land.” In Nigeria, where Bassey lives, Friends of the Earth is calling for no new oil development whatsoever, though it does accept more efficient use of existing fields. If Obama isn’t willing to consider those types of solutions, Bassey says, “he may as well be coming [to Copenhagen] for vacation.”

Leaving resources in the ground is not an option for us. Using those resources as efficiently as possible is a more realistic expectation. Moreover, Nigeria should totally control its resources and work with African Americans to create more ownership of its oil resources by black-owned companies. AAEA also supports carbon trading. (photo courtesy FOEI via Flickr via Grist)
Posted by Norris McDonald at 2:55 PM