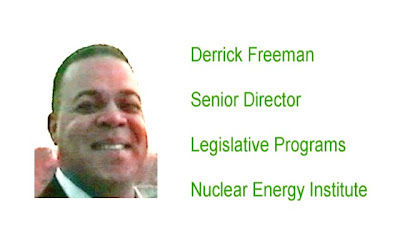 Derrick Freeman is the Senior Director for Governmental Affairs at the Nuclear Energy Institute (NEI). He joined NEI in July 2007 after working on Capitol Hill for many years. Mr. Freeman served as Legislative Counsel to Senator Mark Pryor (D-Arkansas) where his responsibilities included advisement on energy, taxation, and economic policy.
His professional experience encompasses several years in the financial services industry in New York City and on Wall Street. He served as Vice President and Counsel at the U.S. Investment banking arm of the Netherlands based ABN/AMRO.
Derrick graduated from Washington and Lee University with a Bachelor's Degree in Economics and received his Juris Doctorate from Howard University School of Law. He is a member of the New York State Bar.
Posted by Norris McDonald at 2:23 PM