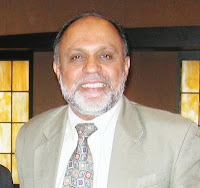 Islamic Foundation for Ecology and Environmental Sciences (IFEES) Founder and Director, Fazlun Khalid, right, was invited by the Secretary General of the UN, Ban Ki Moon, to participate in a round table discussion on Climate Change with world leaders on September 22nd in New York. This is the statement he made on the same day:

"It hasn’t quite entered the human consciousness, that if planet earth suffers we suffer and that we have nowhere else to go. We are part of an integrated earth and when we reduce the natural world to an exploitable resource this turns inwards on us. How else does one explain the consequences of climate change? Yes, the human species is unique. We have the capacity to observe the world around us, describe what we see, quantify it and then take advantage of it. However, the most extreme and all pervasive form of this is our collective, unfettered defilement of nature. For example we have managed to consume in a space of two hundred and fifty years or so, fossil fuel resources that have taken 250,000,000 years to lay down. That is, averaging consumption in one year, of what has taken nature a million years to produce. This is set to continue unabated until these resources run dry even as the chickens come home to roost. Prosperity it seems is based on creating discontent as consumers are seduced to vie with each other in pursuit of technopia. We have political, financial and industrial systems, in place that will ensure that this continues without interruption. If there is a lesson we can learn from the financial crisis it is that market forces are a fiction because money itself is a fiction. It can be created by the stroke of a pen or push of a button by those privileged to be bankers. The rest of us work for a living.

Individual nation states have their own priorities and agendas. But, the common denominator however is growth based on fictitious money. While those ahead in the race are able to create more money to stay ahead, those behind engage in an almost impossible game of catch up. The victim of this game is planet earth and climate change is the result. Moderating this appears to be what Copenhagen is about and this requires, the rich nations particularly, to tighten their belts severely, whilst those behind loosen theirs’ ever so gently. There is no gain without pain. Current growth rates steal from the legacy that by right belong to future generations. It would seem that in allowing to be swept away by forces intent on destroying the natural world in the name of economic growth faith communities have surrendered their responsibilities, Muslims, not least amongst them. Our job is to prod this group, which constitutes twenty percent of the world’s population, to wake up to their teachings and join forces with other like-minded people to leave a liveable planet for our children. It is now or never - well almost."

Posted by Norris McDonald at 6:24 PM