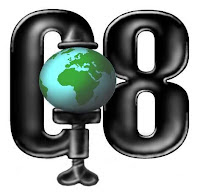 The G-8 is an informal international forum of industrialized democracies whose presidents and prime ministers meet to discuss issues of mutual or global concern.
The G-8 includes the 1) United States, 2) United Kingdom, 3) Russia, 4) Japan, 5) Germany, 6) Canada, 7) France and 8) Italy.
The G8 has been inviting 1) China, 2) India, 3) Brazil, 4) Mexico, & 5) South Africa to its summit meetings to evolve G8+5 strategies to mitigate global warming. China and India are signatories to the Kyoto Protocol but are not subject to the emissions caps because they are labeled as developing nations, which is ridiculous.
The G8+5 will discuss a blueprint of the post-Kyoto framework that would serve as the background paper for global negotiations to begin under U.N. auspices in December 2007 and to conclude by 2009. They have agreed in principle to:

limit global carbon dioxide emissions to somewhere between 450 and 550 parts per million compared to the present level of 379 parts per million, in order toframe emission targets according to historical responsibility and developmentneeds, establish a carbon market, linking the European emissions trading schemewith others emerging across the globe and give a focus on research anddevelopment, energy efficiency, and means of adapting to the unavoidable effectsof climate change.

Posted by Norris McDonald at 10:37 AM