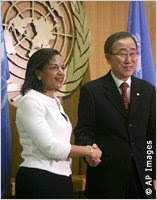 After presenting her credentials to U.N. Secretary-General Ban Ki-moon on January 26, Susan Rice, U.S Ambassador to the United Nations, noted that international climate negotiations will be a priority. Rice said:

“To tackle global warming, all major emitting nations must be part of the solution. Rapidly developing economies, such as China and India, must join in making and meeting their own binding and meaningful commitments. And we should help the most vulnerable countries adapt to climate change.”

Susan Rice will be a central player in developing a global warming mitigation plan. She will be working on the plan with Hillary Clinton, Secretary of the Department of State, Stephen Chu, Secretary of the Department of Energy, Lisa P. Jackson, Adminstrator of the U.S. Environmental Protection Agency, Nancy Sutley, Chairwoman of the President's Council on Environmental Quality and Carol Browner, Energy Czar.
Rice also has nuclear nonproliferation on her agenda. We hope the Obama administration will embrace the Global Nuclear Energy Partnership (GNEP) for cooperating countries in order to promote the safe and secure use of nuclear power for electricity production and climate change mitigation. We also hope she will support the U.S.-India Civilian Nuclear Cooperation Initiative (1) (2), and other '123' Agreements.
Posted by Norris McDonald at 10:26 PM