Congressional Black Caucus Chairwoman Barbara Lee and Joint Economic Committee Chairwoman Carolyn B. Maloney held a telephone press conference on Friday to follow-up on the release of the report and to take questions. Representative Maloney and Representative Lee pledged to aggressively address the issues included in the report.

Other key report findings include:

From February 2007 to February 2010, unemployment among African American men more than doubled, climbing from 9.0 percent to19.0 percent.

Among African American women, unemployment increased from 7.1 percent to 13.1 percent during the same time period.

The median duration of unemployment for African American workers also has doubled, increasing from less than three months before the recession began to almost six months in February 2010.

Forty-five percent of unemployed African Americans have been out of work for six months or more. 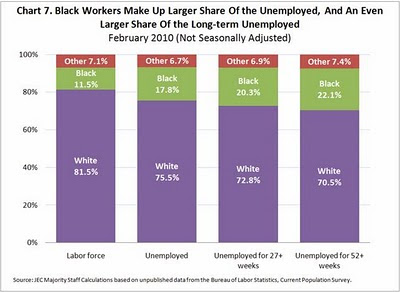 Posted by Norris McDonald at 11:43 PM