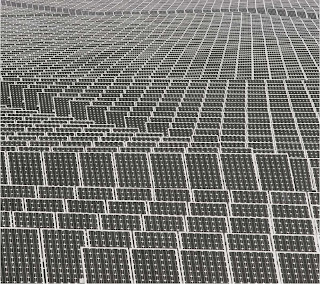 Two companies are planning to cover 12.5 square miles of central California with solar panels, which will generate about 800 megawatts of power, roughly equal to the size of a large coal-burning power plant or a small nuclear plant. A megawatt is enough power to run a large Wal-Mart store or 1,000 homes.

The power will be sold to Pacific Gas & Electric, which is under a state mandate to get 20 percent of its electricity from renewable sources by 2010. Though the California installations will generate 800 megawatts, they will operate for about a third of the time of a coal or nuclear plant and thus will produce about a third as much total electricity. It is also not dedicated power and there will always have to be backup power available because of cloudy days. And of course no power is produced at night.
OptiSolar will install 550 megawatts in San Luis Obispo County. The SunPower Corporation will build about 250 megawatts at a different location in the same county. The companies are forbidden by contract terms to talk about price.

The largest photovoltaic installation in the United States, 14 megawatts, is at Nellis Air Force Base in Nevada, using SunPower panels. Spain has a 23-megawatt plant, and Germany is building one of 40 megawatts. A recently built plant that uses mirrors to concentrate sunlight, called Nevada Solar One, can produce 64 megawatts of power. The 12.5 square miles of the project represents about one-fifth the size of Washington, D.C. (The New York Times 8/15/08)
Posted by Norris McDonald at 11:49 PM