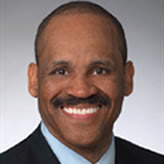 DC United soccer team owner Victor MacFarlane, left, wants to build a 24,000-seat stadium in Prince George's County, the richest majority black population county in the United States. D.C. United has played at 48-year-old RFK Stadium since the franchise was founded in the mid-1990s. MacFarlane would pay 25 percent of the $200 million cost for the stadium and the remainder would be financed by tax revenue generated at the facility. Legislation has been introduced in the Maryland General Assembly to earmark the taxes for construction.
AAEA supports this proposal.
MacFarlane is considering several locations near Metro stations for constuction of the soccer stadium. The Maryland Stadium Authority released a study in September concluding that a professional soccer stadium in Prince George's could create more than 1,000 jobs in the county. MacFarlane's original plan was to build a hotel and conference center attached to the stadium at Poplar Point on the Anacostia River in Washington, D.C. with $150 million to $225 million in public financing, but the D.C. Council and Mayor Adrian M. Fenty (D) did not want to commit that much public money after the long fight over the financing of the Washington Nationals' $611 million baseball stadium. (The Washington Post, 2/12/09)
Posted by Norris McDonald at 11:15 AM