What About Coal-To-Liquid (CTL)? 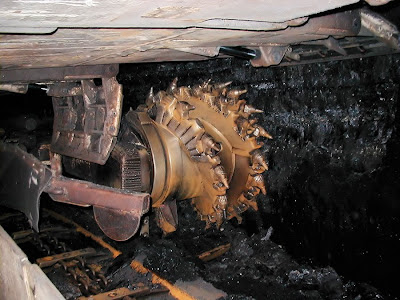 AAEA is not a traditional environmental organization because we do not oppose everything, everywhere, all of the time. We cannot put everything off limits and expect America to prosper. Mainstream environmental groups are beginning to pose a threat to the American way of life becuase of a 'build absolutely nothing anywhere near anything' (BANANA) philosophy. By the same token, we can't just allow industry to run willy nilly and plunder everything in the name of supply and profit. And {read this in a hushed tone because people get upset when we bring it up} will Black Americans participate in America's energy production? Only Nigerian-born Kase Lawal is drilling offshore right now. Anyway, we digress.
AAEA supports converting coal-to-liquid. Coal can be converted into diesel fuel and gasoline using a method called Fischer-Tropsch. It was developed by the Germans to fuel their World War II war machine and now the only conversion plant is located in South Africa and is operated by Sasol. If we are going to preserve the Arctic National Wildlife Reserve (ANWR), and the east and west coasts of America, and we support such preservation, then we should be willing to compromise somewhere because America needs and uses oil. CTL is our compromise. Now before traditional enviros scream about the carbon dioxide penalty, we have a solution: convert the CO2 to gasoline. AAEA is on the cutting edge of promoting this technology, but will not get any recognition for it because [well you know why]. Kentucky here we come.
Photo: Longwall underground mining equipment
Posted by Norris McDonald at 9:11 AM