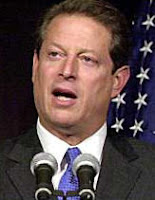 He is everywhere. And carbon-neutral. It is the former Vice President Al Gore now promoting seven concerts to promote the global warming issue in seven locations on 7-7-07. Blbical? Preliminary cities include London, Shanghai, Rio de Janeiro, Cape Town, South Africa, Kyoto, Japan, Moscow and Washington, DC. Preliminary names for the concert are "Live Earth," and " Save Ourselves."

Gore appeared at the MTV Music Awards in New York, the Grammy Awards in Los Angeles and will probably receive an Oscar at the Academy Awards. He has also been nominated for a Nobel Peace Prize. The man is clearly competing with Jimmy Carter for a post White House 'activity' award. He is also definitely running for president (without announcing). (Wash Post)

Alliance for Climate Protection
Posted by Norris McDonald at 1:53 PM