Race Riots are Back: "White Girl Bleed a Lot" 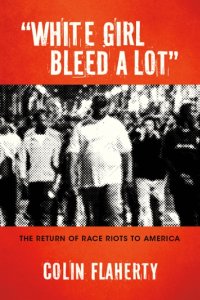 Race riots are back.

Along with widespread racial crime and violence.

In hundreds of episodes in more than 50 cities since 2010, groups of black people are roaming the streets of America -- assaulting, intimidating, stalking, threatening, vandalizing, stealing, shooting, stabbing, even raping and killing.

But local media and public officials are silent. Crime is color blind, says a Milwaukee police chief. Race is not important, a Chicago newspaper editor says.

That denies the obvious: America is the most race conscious society in the world.

Everything except black violent crime. That is Taboo.

Result: Few know about it. Fewer still are talking about it.

The list of cities under attack is long and getting longer -- with some cities suffering dozens of attacks in the last year alone:

Almost as astonishing is the willingness of people in authority and in the media to deny it. Ignore it. Explain it away. Even condone and lie about it.

A member of Congress from Chicago, Bobby Rush, said black violence in Chicago was routine and the only reason anyone was paying attention to the race riots in downtown Chicago was because it was it was black on white violence. This is a theme heard in Rochester, Washington, D.C., and dozens of other places: ‘What’s the big deal? This has been happening a long time in black neighborhoods.’

Congressman Rush is probably right. Which means this problem is hundreds of times worse than we think.

Reaction from the press
Posted by Norris McDonald at 7:06 PM