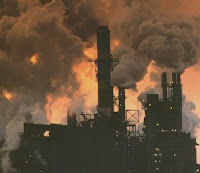 According to a Chicago Tribune article entitled, "Chicago's Toxic Air:"

"People living in Chicago and nearby suburbs face some of the highest risks in the nation for cancer, lung disease and other health problems linked to toxic chemicals pouring from industry smokestacks..."

Cook County is ranked worst in the nation for dangerous air pollution and Chicago was among the 10 worst cities in the U.S. based on 2005 data from an Environmental Protection Agency report. In Will and DuPage Counties, six factories rank in the region's worst 50. Two large visible pollution sources include the Mittal Steel plant in Riverdale and the Corn Products refinery in Bedford Park. An Avery Dennison plant in Niles had the third highest risk score in Cook County. No-Sag Foam Products in West Chicago ranking as DuPage County's third-highest risk score. The polluter ranked as the worst in Cook County— Chicago Castings Co. in Cicero closed this year.

One factory behind Cook County's high risk score is the A. Finkl and Sons steel mill just west of Lincoln Park. Finkl plans to close the mill near Lincoln Park, where the population is 84 percent white, and move to another site on East 93rd Street on the Southeast Side, a neighborhood that is 96 percent black.

According to the article by reporters Michael Hawthorne and Darnell Little:

"Minority neighborhoods have been hit hardest, from the mostly Latino enclave of Pilsen to mostly black communities on the city's South and West Sides. Of the Top 50 polluters in Cook County in 2005, 60 percent are where black or Latino residents outnumber whites. Nearly two dozen of the region's top polluters are within 8 miles of the Altgeld Gardens public housing project off 130th Street on the Far South Side, where nearly all residents are African-American. The two-story brick apartments are surrounded by steel mills, abandoned factories, landfills and a sewage treatment plant."