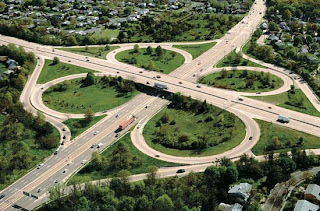 Is the United States heading towards becoming a centralized socialist state? Any reasonable person would answer that question in the affirmative if you consider that Fannie Mae, Freddie Mac and the Highway Trust Fund have been bailed out in the same month. The House-passed the Highway Trust Fund bailout [H.R. 6532] on July 23, 2008 by a vote of 387 to 37. It passed in the Senate today (9/10/08) on a voice vote. Some Republicans complained during debate about the addition to the deficit, but other Republicans, who usually pray at the altar of the market, pushed for passage of the bail out. Interestingly some members of Congress have called for taking money from the mass transit portion of the trust fund to make up for the highway portion. The House rejected that proposal. The Highway Trust Fund is normally financed by taxes on gasoline. Since the public has been driving much less due to high gasoline prices, the Highway Trust Fund does not have adequate funds for state highway projects. So Congress passed a bailout of $8.5 billion to temporarily bailout the fund and President Bush will sign it real fast. The question before America though is will this be a continuing bailout? Clearly it will if states do not scale back highway construction projects and gasoline prices remain high.
The Highway Trust Fund pays for a percentage (sometimes as high as 85 percent) of state's highway construction projects. The U.S. Department of Transportation has already started curtailing how much and how often it reimburses states from the Highway Trust Fund. To remain solvent, it is projected that the trust fund needs an immediate $8.5 billion infusion from Congress. States have to wrestle with the potential fiscally irresponsible act of continuing to award projects when they are unsure if the federal government will reimburse them. The Bush administration dropped its opposition to the House bill and urged immediate approval. A significant number of jobs are at stake and it is an election year, yet America needs a policy that transcends election years politics and assures a dependable funding mechanism for proper construction and maintenance of our highway system. Yet some high ranking members of the Senate consider the bailout to be an unprecedented transfer of money from the general fund to the trust fund for highways. They believe that since the general fund has no surplus, such a transfer would mean borrowing the billions from future generations. The bottom line is that the federal government cannot keep bailing out everyone or soon we will be a centralized government like the old Soviet Union.
Posted by Norris McDonald at 5:19 PM