Obama Names LaHood To Be Secretary of Transportation 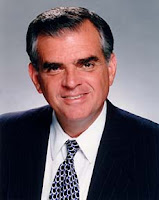 President-Elect Barack Obama has nominated Illinois Congressman Ray LaHood (R-IL) to be his Secretary of Transportation. He has a degree in education from Bradley University in Peoria, Illinois.
The mission of the Department is to serve the United States by ensuring a fast, safe, efficient, accessible and convenient transportation system that meets our vital national interests and enhances the quality of life of the American people, today and into the future. The Department of Transportation was established by an act of Congress on October 15, 1966. The Department’s first official day of operation was April 1, 1967. DOT Agencies.
DOT is responsible for administering Corporate Average Fuel Economy (CAFE-Chapter 329 Automobile Fuel Economy) standards and it is regulated through the National Highway Traffic Safety Administration (NHTSA). First enacted by Congress in 1975, the purpose of CAFE is to reduce energy consumption by increasing the fuel economy of cars and light trucks. Regulating CAFE is the responsibility of NHTSA and the Environmental Protection Agency (EPA). NHTSA sets fuel economy standards for cars and light trucks sold in the U.S.; EPA calculates the average fuel economy for each manufacturer. This site contains an immense amount of information about the CAFE program, including a program overview, related rulemaking activities, research, fleet characteristics and summaries of manufacturers’ fuel economy performance since 1978.
Posted by Norris McDonald at 5:47 PM