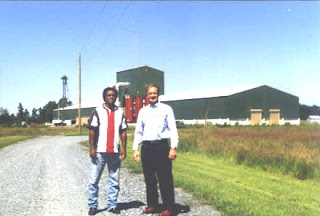 By Norris McDonald
Jim Perdue, heir and CEO to Frank Perdue's chicken empire, surely would oppose President Bush's latest 11th hour regulatory rule to exempt factory farms from federal reporting requirements for chicken litter emissions. Now I cannot speak for Jim officially, but he did not build an $11 million facility to convert chicken 'litter' into fertilizer pellets for no reason. Of course this EPA rule is more about emissions of ammonia or hydrogen sulfide from manure pits or other farm operations than it is about nitrogen loads into the Chesapeake Bay or other water bodies, for which Jim built the facility. Yet the chicken litter pellet production facility solves both problems. Most people do not know that Jim is a scientist with a Ph.D. in Marine Fisheries. 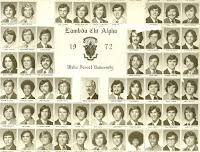 As a chronic, acute asthmatic, I, like EPA, want to know about the sources of emissions that might cause respiratory problems or deaths, but smog, not chicken litter emissions, is my real enemy. Now surely frat will support any reg that reduces paperwork and regulatory burdens, but his technology fix is the way to go. His Microstart60 product produced by Perdue AgriRecycle removes, dries and processes litter for reuse, which also reduces the ammonia or hydrogen sulfides produced from the manure.
I am pictured above with Jim, upper right, in front of his chicken litter pelletizing facility in Delaware and in our 1972 frat picture, lower left. (The Washington Post, 12/13/08)
Posted by Norris McDonald at 12:59 AM